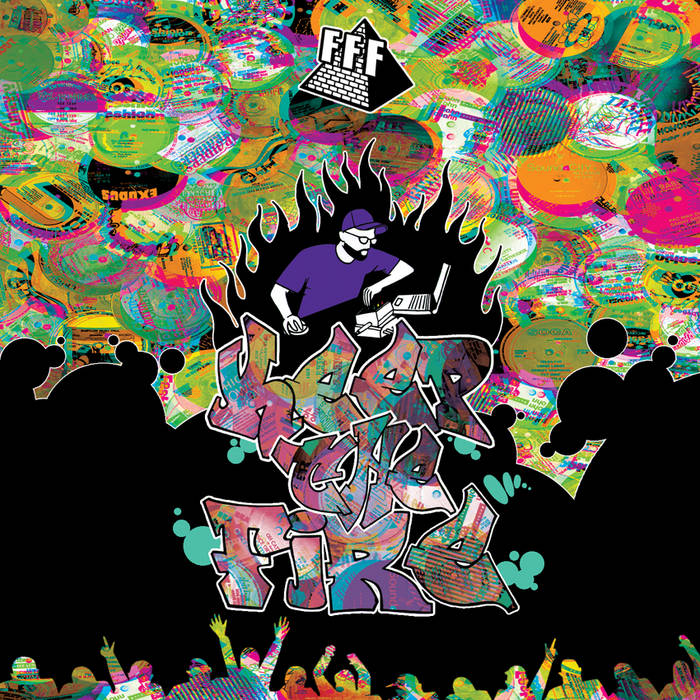 Gade//System how can you not like a double album by one of the most talented Breakcore/Jungle Artists on the planet?
see? i thought so. worth the money. Favorite track: Amen Soldier.

Ben Burns I bought this album to support FFF, not because it's good.

b-dog777 I bought this album to support FFF, because it's so fucking good. Favorite track: Reality.

"This is a great album! Lots of heavy and consistent tunes throughout"
- DJ K (KILLA RECORDS)
www.killarecords.com

"Rougher than a badgers arse and more breaks and gunshots than the final episode of Breaking Bad. Ballistic!"
- Dave Skywalker
www.daveskywalker.com

"FFF brings Jungle music back to where it belongs!!"
- Deformer (REDRUM RECORDZ)
redrumrecordz.bandcamp.com

“Tonight is all about musical competition!” … And FFF aim fi win!

Keep The Fire is a rolling, raucous Junglist manifesto spread over a massive double CD of 22 tracks. And when it kicks, it kicks hard! Massive hoovers, chopped-to-shreds Amen breaks, rolling bass lines, wheel-ups and outrageous callouts ricochet off of each other in a 2+ hour document of a true Junglist soldier’s life in the dancehall.

It’s the mastermind creation of Rotterdam-based FFF, born Tommy de Roos. Rotterdam’s influence on the hard end of electronic dance music is undeniable, and no one would question FFF’s dominance in the realm of hardcore breakbeats (or if they do, they’ll swiftly get a fire-y dubplate dropped on their head!) Releasing killer tunes since 1997, he’s done so on virtually every label associated with the post-ragga movement, blending oldskool sounds with new-school production techniques in endlessly creative ways over the last 15 years.

FFF already has one full length out on Murder Channel, 2011’s 20.000 Hardcore Members Can’t Be Wrong. But with Keep The Fire, de Roos didn’t want to linger just on the dark and crazy beats. “Sampling is the main ingredient of the album,” says FFF. “Almost all tracks are soundclash inspired battle tunes. Most samples are taken from either vinyl or soundclashes.” Soundsystem Clash is all about doing your utmost to get the crowd to favor your tunes, so sometimes things get a little nasty. But FFF says “I don't support any kind of violence except for musical violence. I see the tracks as battle tunes for the dancefloor. I love the energy of soundclashes and the idea of killing another dj/soundsystem/artist etc through music. I think the whole clash vibe adds to the energy of jungle.”

Keep The Fire is also indebted to another scene born in de Roos homeland, Bubbling. These were sped-up digital dancehall tracks pioneered by artists like DJ Moortje & DJ Kenneth in the 90s, tunes that made crowds go absolutely nuts. FFF wanted to capture this feel in the album as well - “We mainly listened to Bubbling through bad quality cassette tapes (copy from a copy from a copy etc.) Really noisy gritty tapes full of hiss. A lot of local guys were also making tracks on fasttracker, impulsetracker software, and played at Bubbling battles mostly in youth centres around Holland. I loved that the Bubbling sound has the same energy as Jungle, crazy edits, dancehall vocals, etc.” So it’s actually the Bubbling that makes Keep The Fire both a dance album and a FUN album, and holds it together for listeners beyond DJs.

Keep The Fire sees FFF standing shoulder to shoulder with his musical peers Mu-ziq, Bong-Ra, Shitmat, Soundmurderer, Jacky Murda & RCola, Krinjah, Tester, and even original mentalist jungle producers Remarc and Bizzy B. His brand of sonic mischief, hard-but-playful sound, and slaughter-with-a-smile aesthetic is the perfect match for Murder Channel. Every single track will have audiences calling “Tuune!” and demanding a wheel!!
- Review by Kid Kameleon
kidkameleon.com

"MURDER CHANNEL" is independent music label&party from Japan.based in Tokyo since 2004.

All merchandise will ship from Japan.

Bandcamp Daily  your guide to the world of Bandcamp

Cannibal Corpse's George "Corpsegrinder" Fisher stops by for an interview